What Does "Bipolar" Mean?: Five Surprising Uses From Across the Internet

In order to put together this site, I need to do a lot of online searches. Most of those searches involve searching for the term “bipolar”. Along with information that I find useful for my daily news or my weekly blog, I also find something of a flotsam of other uses of the term that can be a little surprising. Since I’ve had to spend so much of my time wading through these alternative uses of the term, I figured I was entitled to get some use out of them. So, I’ve collected together these uses that are sometimes interesting, sometimes bizarre and sometimes offensive. 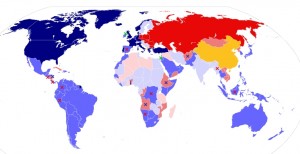 Apparently, “bipolar” is also a term that is used in international relations. Basically, when the world is divided into two main powers, each with its own sphere of influence, the world is said to be “bipolar”. I suppose, in principle, it could be used in a non-international way. For instance, the West in Canada might complain that Canada’s power structure is too “bipolar”, with power divided between Ontario and Quebec.

I suppose the world isn’t as “bipolar” as it was back during the Cold War, when the U.S.S.R. and the U.S.A. competed for dominance, but the word still crops up from time to time. For example, as China’s influence grows, some people have asked whether international politics will become more “bipolar”, with China and the U.S.A. competing for power. For instance, this article in the Economonitor references the upcoming “‘bipolar confrontation’ between America and China.” Wikipedia has a section about it here. 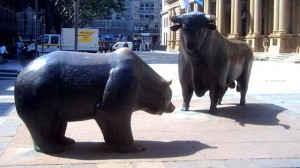 Okay, here’s where the term “bipolar” can be a little offensive. A number of articles are written about the market and its heavy fluctuations. Repeatedly, the term used for this was to call the market “bipolar”. As far as I can tell, the implication here is that the market’s “mood” has become unstable, moving from high (bull) to low (bear) and back again. So, bipolar disorder is being used as a metaphor to describe the moods of the market.

I suppose on one level, this isn’t exactly insulting. Since the market is already said to have “moods”, an extension of that analogy is that, when the moods of the market start acting like bipolar people do, then one might say it is bipolar. Of course, this is something of a stretched metaphor. Moreover, illness metaphors don’t exactly respect the seriousness of the condition (I always cringe a little when I hear something described as a “cancer”). So, we have the standard problem with disease metaphors which is that they don’t respect the seriousness of the condition, even if the analogy is apt per se.

The problem is that the analogy isn’t even correct. The “bipolar market” doesn’t represent bipolar disorder with long episodes in a cycle. “Bipolar” here just means “unstable”. If anything, the metaphor should simply be that the market is having a mixed episode or is rapid cycling, not that it’s bipolar. Underlying the “bipolar market” metaphor is an assumption that “bipolar” just means “unstable”. However, this is already a caricature of bipolar disorder.

This isn’t a rare metaphor, either. Literally every other day, I find a news story referring to the “bipolar market”. Here is a particularly egregious example this week from Reuters, of all sources. The title calls the market “bonkers” and then uses the word “bipolar” later in the same context, using them as though they are synonyms. How does this stuff slip past editors?

#3: A Kind of Electrical Transmission

Apparently, there is a way of transmitting electricity that is called “bipolar”. This shows up on the news feeds as new discoveries are made in the area, or new inventions using bipolar electricity transmissions are used. To be honest, I don’t really understand anything to do with electricity, except that I shouldn’t touch it, and I should call a professional whenever I need something fixed. Here is a picture of a bipolar high-voltage direct current: 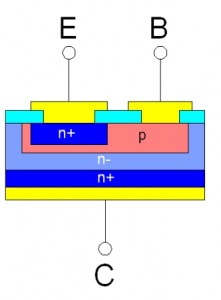 No, it didn’t make any sense to me either, but apparently these things are fairly powerful. Basically, because the circuit is bipolar, if one part of the transmission fails, electricity will still flow at half capacity. In effect, bipolar currents provide their own backups, which cuts down on power failures. Since I dislike power failures, they get a +1 vote from me.

There’s nothing the least bit offensive about this use of the term, as it was coined back when bipolar disorder was called “melancholia”. In fact, it was an opportunity for me to learn a (very) little bit about electricity, so great! 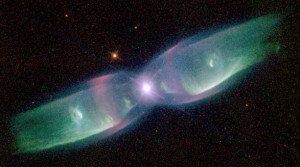 Apparently, there is a type of nebula called a “bipolar planetary nebula”. These are discussed in the news every once in a while like this story from back in August. Often, a dying star will emit its matter from both of its poles, rather than exploding as one might expect. This causes a symmetrical appearance to the nebula, in which clouds of stellar matter form on each side.

Of course, there’s nothing offensive about this use. It’s just another meaning of the term “bipolar”. I can’t help feeling a little bit of extra affection for these nebulae. After all, of all the things in the world, we ended up with something of the same name. Sure, I’m a human being and it’s a nebula, but there’s a certain kind of kinship that comes with name sharing. I think I might find ways to sneak pictures of bipolar nebulae into my webpages from now on, as a kind of running in-joke.

I recently started a Twitter account (which you can join here!), and I was introduced to the bizarre world of Twitter linguistics. Looking around for other channels dedicated to bipolar disorder, I realized something awful.

In many cases, “bipolar” is simply being used as a synonym for, well, “b*&ch”. I’d actually heard this use of the term once before in my life. At first, I figured the person had actually dated a bipolar woman, but eventually realized he just meant to say that he thought she was moody. The term is always derogatory and almost exclusively used to refer to women. In several cases on Twitter, women were using it to refer to themselves.

Here are some examples of channels I found. I deleted the actual channel names here, but the first one includes both the words “b*&ch” and “bipolar”, while the second one uses the word “b*&ch”:

To translate, these are basically people who are exclaiming just what “b*&ches” they are, and equating their *cough* directness with being bipolar. For instance, that second one says “My mouth is bipolar. It’s bound to say whatever, and I don’t give a f*&k.” There are dozens and dozens of channels like this on Twitter, to the point where finding legitimate channels about bipolar disorder is difficult.

It goes without saying that this is fairly offensive, though, from what I could make out above, these Tweeters don’t really care if they offend people. It was a shame to see that, for a good portion of people on Twitter, “bipolar” just means something like “b*&ch”.

The internet is a weird place. One of the fun things about news searches is that you end up discovering a lot of uses of terms that you didn’t know about, and a lot of uses of terms that you didn’t want to know about. Unfortunately, alongside fun uses in international relations, electrical engineering and astronomy, “bipolar” right now can mean simply “unstable” or even “b*&ch”. These uses must be relatively new, as bipolar disorder wasn’t even called “bipolar disorder” until a couple of decades ago. They show that there are still some real misconceptions of bipolar disorder out there, and we have a lot of work to do.

8 Responses to What Does "Bipolar" Mean?: Five Surprising Uses From Across the Internet