I first encountered this concept when researching social rhythm therapy. I won’t discuss the details of that therapy in this post (there’s more information here), but one of its important concepts is that we go through stages of coping with bipolar disorder. One of these stages is “mourning,” the stage in which we come to terms with the negative ways in which bipolar disorder has impacted our lives. 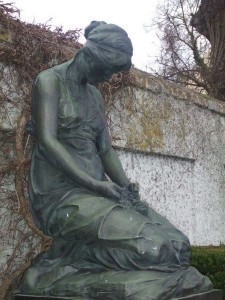 This idea hit me very hard. At first I thought that I had no opinions on who I would have been. I tend to be skeptical that there is some sort of “real me” under this disorder. However, I ultimately realized something important. Even though I didn’t think of him as the “real me,” I still thought of the person I might have been as being the “other me.” Moreover, my relationship to him was one similar to grief. He is someone I encounter in my imagination (though not my memory), and whom I will never get to see.

I tend to think of this other “me” as my big brother. He’s someone who resembles me, has many but not all of my experiences, and is older in the sense that his life hasn’t had the kind of setbacks that mine has. I remember discussing my bipolar disorder with a colleague of mine, and calculated that my bipolar disorder, back when I wasn’t properly treated, had set me back about five years.

I realized something else important about this other “me.” He isn’t really my theory of what I would have been like if I didn’t have bipolar disorder. Instead, he is a cobbling together all the things that I’ve missed out on because of my bipolar disorder. It doesn’t account for any of the accidental things along the way. It doesn’t give him any room to develop his own life or have his own discoveries. He’s just me, stripped of one aspect of my life. 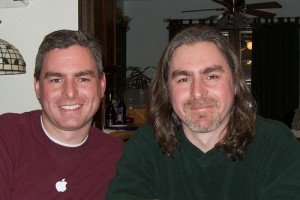 So, what is this other me like? Well, he’s better dressed than me and better groomed. He’s got a house and a car. He laughs more than me, but has a worse sense of humor. He’s a successful math professor. He never went into philosophy, since he never had the drive to improve his life through the use of reason. He may or may not be religious, as he didn’t have to account for the kind of ecstatic experiences that drove me in that direction. Instead, he’s politely agnostic. He probably votes Liberal. I’m not entirely sure of his views on religion or politics, since he doesn’t like to discuss those matters.

What’s also interesting about him is that I imagine him seeing me back. From slightly behind my right shoulder, he looks at me, worries about me and wants to help me, all while not quite understanding me. He normally wouldn’t have time for someone like me, but I’m his little brother and he cares about me. However, he doesn’t have the kind of empathy that I have. He’s me stripped of much of my personal suffering, so he’s never really learned to empathize. So, he’s like the successful older brother with whom it’s difficult to relate.

However, what I’ve realized is that I need to learn to live my life without him. I need to come to acceptance of his loss. In this case, missing him isn’t about him. It’s about myself, and about accepting my own life, with its own (extreme) ups and downs. And I still hover between stages four and five, between depression and acceptance, at his loss. Even though he is an imaginary object, he represents something that is very important. He is the unimpeded me.

So, I guess I’m treating this post as a eulogy for this other self. Bipolar disorder took him away from me, but it also gave me myself. I am the real me. But he has been with me for a long time, and has walked with me on every step of my life. Now, though, I need to remember him, but walk alone. Good night, big brother. Requiescat in pace.

18 Responses to Loss of a Brother: Mourning the Healthy Me