In his fascinating documentary, “The Secret Life of the Manic Depressive,” Stephen Fry asks a number of people with bipolar disorder whether or not they would get rid of bipolar disorder, if they could simply push a button. Almost everyone answers, “No.” Stephen Fry himself says that he wouldn’t, and he ends the documentary on that note.

This question really got me thinking. Would I be willing to push that button if I had the opportunity? I realized that the question made me address a number of difficult questions. The first one was how I conceptualized bipolar disorder itself; is it a part of me or is it something that I have? The second and perhaps deeper question was what I think the place of suffering is in my life.

So, I thought I’d write a post about the question itself. I’ll admit right up front that I’m still torn about the answer. I guess in some ways, that is kind of the point.

I just want to make a couple of quick clarifications before I start. First, the question is about whether I would push the button for the future, not whether or not I would rather not have lived with bipolar disorder in the past. Those are two separate questions, and I’ve dealt with that second question in another post about the healthy me.

The second is that, no matter what answer I give, I don’t intend it to be a general answer for everyone. The question is necessarily a personal one, and each person may give a different answer. There is no “correct” answer. There is only what each of us would want.

Is Bipolar Disorder a Part of Me or Is it Something I Have?

I think a lot of the answer to this question rests in how I conceive of the place of bipolar disorder in my life. If I think of bipolar disorder as something that is a part of my personality, it is very hard for me to answer that I would push the button. After all, pushing the button would be wanting to be, at least in part, a different person. There’s something strange about wanting to be someone else.

When it comes to conceptualizing bipolar disorder, I believe that the best narrative is what it is most therapeutic to believe. I actually mean this literally, though I don’t have room to justify it here. The relevance, though, is that I’m looking for the conceptualizing, the narrative if you will, that will help me, personally, be healthy.

Personally, I have found the conception of bipolar disorder as being a part of my personality as being the most therapeutic way of thinking about the condition (I’ve also stated that I also don’t conceive of myself as my personality, but that is another story). For me, personally, treating bipolar disorder as something to integrate into my life rather than fight has really helped me.

So, the score is 1-0 for not pushing the button.

The Place of Suffering in My Life 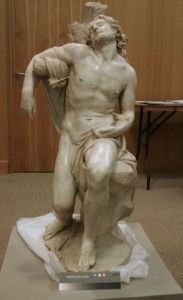 Another question that I realized the button challenge made me deal with was the place of suffering in my life. Being bipolar has led me to a lot of suffering. It has harmed relationships with other people, impeded me in my career, and often, simply sucks in its own right. I’ve often thought, darn it, if I hadn’t been bipolar, I could have done x. This has led to a lot of regret and, unfortunately, self-blame. I have no doubt that bipolar disorder will cause me more suffering in the future.

But here I need to ask myself a second question. What would I get if I were to push the button? Happiness? That seems like a lot to ask of removing a condition, especially since happiness is something hard to attain, regardless of whether or not one is mentally ill. If I were to get rid of bipolar disorder, other types of suffering would replace it, though I know not what. I would find that there would be something else to replace it.

Bipolar disorder is something that is I have largely learned to deal with. It is the enemy I know. Therefore, this is the life that I know how to live. To get rid of it would be to replace it with something else, and I’d effectively need to learn to live my life all over again. So much of my own therapeutic approach to bipolar disorder is learning to incorporate it into my life, and to decide to push the button would be to go against my entire approach to life.

Now, I realize I’ve created a paradox here. After all, if I didn’t have bipolar disorder, I wouldn’t need to approach my life therapeutically, at least in that respect. However, I’m not in a position right now to conceive of my life from outside of my condition. I’d need to push the button while bipolar, and conceiving of bipolar disorder as something to integrate is such a part of my personal narrative that I simply can’t push the button from within that narrative.

So, the score is 2-0 for not pushing the button.

Other People in My Life

However, the decision about whether or not to push the button is not merely about me. That I am bipolar affects other people in my life. Though I constantly try to shield others from the negative aspects of bipolar disorder, I know that it is not within my power to do so completely. I believe that if I were not bipolar, I could be of greater help to the other people in my life.

This really gives me pause. It is true that I might have to relearn to live my life, but that can be conceived of as another sacrifice that I would be making for other people. Another part of my personal, therapeutic narrative is that I want to be able to benefit the people around me. I believe that I largely do. However, I can see the ways in which being bipolar can impede me in that regard. I simply want to be better at it.

So, that would seem to change the score to 2-1 for not pushing the button. However, there are a lot of other people in my life, so maybe I shouldn’t be scoring all of my reasons equally. After all, my other reasons just relate to me, while this relates to many other people. Since I have a wife and two children, let’s give this reason one point for each of them.

So, the score is 3-2 for pushing the button.

On the whole, then I would probably choose to push the button. This would be my own personal decision; other people may choose differently. For me, though, I can see that if I were not bipolar, I think I would be able to increase the amount I benefit the people around me. I know I had two reasons against and one for, but the latter reason is for me overriding.

20 Responses to If I Could Push a Button and Get Rid of Bipolar Disorder, Would I?