The film has a unique approach that is not found in other documentaries. It interviews not only ordinary people, but also celebrities that have been diagnosed with bipolar disorder. This has both its advantages and disadvantages. On the one hand, we get to see some people whom we sorta know and learn about their experiences. On the other hand, we encounter a group of people that don’t really share our ordinary experiences.

Part One: Fry’s Own Experience 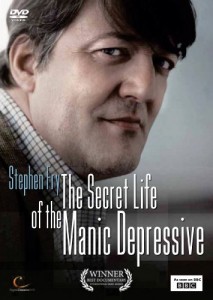 – Fair Use Rationale: to illustrate the person(s), product, event, or subject in question.

The documentary starts off with a discussion of Fry’s own experiences with bipolar disorder in his life. What struck me most about this story is that he was in some ways in the place that I was when I saw the film. I was kind of on the periphery of treatment at the time, having had a number of negative experiences with medication. Fry wasn’t receiving medical treatment at all.

In fact, a lot of the autobiographical component of the documentary focuses on Fry’s own questioning of whether or not he should go on medication or seek treatment. Unlike other autobiographies of bipolar people, where people have settled views on how it should be treated, Fry’s autobiographical section really focuses on his own exploration of what to do about his bipolar disorder. As someone who, at the time, had the same sort of questions, this part was very moving to me.

However, it’s also worth noting that Fry’s own experience really isn’t the same as most bipolar people’s. He is a very high functioning individual, more so than most people who aren’t bipolar, and it can be a little hard to relate with many of his experiences. After all, they include blowing off being the lead in a play and purchasing thousands of DVDs.

This brings us to another issue. Fry is rich. He’s so rich that he doesn’t really share many of the same challenges as people who are bipolar. All of his stresses seem so…chosen. He could back off from his career if he really wanted to, and he doesn’t have to fight to get treatment since he can (or rather could) afford it. So, in a way, he’s asking a different question than most people. 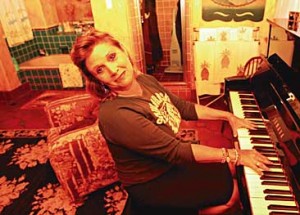 After Fry’s own experience, he interviews a number of famous people who also have bipolar disorder. The two that really struck me were Carrie Fisher and Richard Dreyfuss. Fisher was very interesting because it’s really evident that she is deeply affected by the condition. She is also wealthy enough that she can pretty much do whatever she wants.

As a result, she lives a life that is actually quite interesting. If I was a multi-millionaire, I might be tempted to decorate my house the way that she does, and it really reflects how I often see the world from the inside. In addition, we really see in her some of the fun that can come along with being bipolar.

Dreyfuss, though, really struck me the most in the documentary. The reason for this is that his experiences in many ways paralleled my own, and has continued to do so since I first saw the documentary. He was a successful actor when bipolar disorder started to deeply disrupt his life. He ended up in many fights and nearly destroyed his career. Eventually, he found lithium, and was able to get a handle on the illness.

He made a comment that stuck with me and that I use whenever someone asks me about what it is like to be on medication. They will ask what it is like and whether or not it controls my moods. He said that being on lithium was like “living in a letterbox.” For those of you who don’t remember cathode ray television sets ;), movies used to be wider than television, so black bars were often put at the top and bottom of the screen so that the entire movie could be seen. Medication allowed him to live without the extremes. (My thoughts on this will be the subject of a future blog post).

Actually, Dreyfuss was an important inspiration for me. His own experience with bipolar disorder closely resembled my own, and he had gotten a handle on it. At the time, I really didn’t have such a handle, and I was very happy to hear that someone else did. I had just gone on lithium on the time, and he really gave me hope. 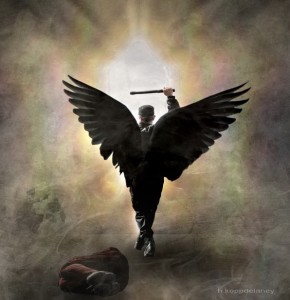 The last part of the documentary is really the most interesting, but not really because of Stephen Fry himself. Rather, he interviews some very interesting people who are dealing with bipolar disorder in different ways. I don’t know if he found the people himself, but they really covered the gamut of experiences.

It includes a formal admiral in the navy who has severe hallucinations and had attempted suicide in the past. However, his experiences of conversing with angels while manic makes him never want to give up his condition. His situation is very striking, as it made me think carefully about the relationship between bipolar disorder and mysticism.

It also includes two young women, one of whom committed suicide after her bipolar disorder made it very difficult to achieve her past goals. It also included another young woman who was living at home with her parents, and we saw the kind of troubles we faced. As a young(er) person who was confronting the ways that bipolar disorder hampered my own goals, this section really hit home.

We also encounter the way that post-partum psychosis can often occur with bipolar disorder. One was clearly upset about the way that bipolar disorder had affected her own parenting, and but her children said that they wouldn’t have her any other way, it was truly touching. Another was a woman who had gone through bipolar-related, post-partum psychosis with her first child. Her physician recommends that she can’t have another one (actually, he says that she can’t, which is a little disturbing; how is this not her decision?).

There are several others, too, and they are fascinating to hear from. However, Fry really isn’t very interesting in these sequences. Actually, he seems strangely out of touch, and doesn’t have very much to contribute to the conversations. The difference between these scenes and those with the celebrities is really quite striking. In those sequences, he was having very deeply engaged conversations. With the ordinary people, he really has nothing to say.

While I’ve given some criticisms of the documentary, especially of Fry itself, The Secret Life of the Manic Depressive is an excellent introduction to the condition. Fry brings together perhaps the most diverse array of people living with bipolar disorder that I’ve ever seen in a documentary. It’s also a genuine exploration for Fry himself, as he tries to determine whether or not to seek medical treatment. While the issues he is facing are quite different from most people’s, there is still a lot to relate to.

Unfortunately, The Secret Life of the Manic Depressive is not available in Canada. In the U.S., it is only available in Region 2 (European) format, so you’ll need to have some way of playing the DVD: