Joe Cox is a filmmaker who recently made the film “David’s Dream.” In this article, he discusses his the excitement and challenges of making this film and how it went from production to its acceptance at World Health Day in Manchester later this year. You can find out more about the film at his blog for the film, David’s Dream, and see more clips about the movie on his Youtube channel. He also runs the personal blog Bipolar Joe.

In 2006, I organised a mini film festival to showcase short films focusing on the experiences of people who have experienced mental health difficulties. This was my first attempt at organising an event of this kind and was a great success. The films covered schizophrenia, depression, eating disorders, anxiety, self-harm and bipolar disorder. Paul Abbott, the Bafta award winning writer and producer of ‘Shameless’, agreed to film an interview to be shown on the day. In the interview, he talked frankly about his suicide attempts which led him to be sectioned at the age of fifteen and the positive effects of his bipolar condition. A film I made earlier in the year following a football team from England competing in a European mental health tournament in Prague was also shown .The event was a great success, but in the weeks leading up to it I became more and more agitated and was getting very little sleep. I didn’t actually turn up to the event as I had run away to Spain to avoid being sectioned. When I returned to the UK, I entered the mental hospital as a voluntary patient

I was released from hospital three months later crashed to a low and didn’t surface for twelve months. 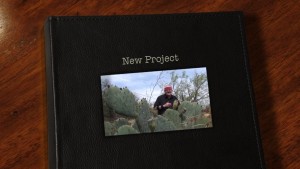 In 2008, I decided to make a film about the experience of being in a state of mania. I had some cards printed with ‘JOMANIA THE MOVIE’ on them and filmed everything I did: driving to London through the night after not sleeping for two days to film with Dr Paul Keedwell, a leading authority on depression for the BBC and author of ‘How Sadness Survived‘. I drove to Scotland to interview Mick, a talented musician who suffers from suicidal thoughts and at times crippling depression. I was receiving calls from the crisis team who were worried about my behaviour. This was great as I could record the phone calls to be used in JOMANIA THE MOVIE! I also met people on Youtube and filmed conversations on Skype with them (a guy in Amsterdam who has his own method of treating his bipolar, a lady in Canada called Michelle Mainwaring, who was the writer of a play called ‘Type2’ ..and finally Dale Hankins, who had seen my work on Youtube and wanted me to come to the USA to make a documentary about a friend of his called David, whom he was taking on a road trip from Iowa to California. Oscar-winning screenwriter Barry Morrow was the bait that got me on the plane).

Dale Hankins was a very highly paid executive for a world-leading consultancy until he was diagnosed with cancer on 9/11 and descended into depression, alcoholism and cocaine abuse. He was sectioned and diagnosed with bipolar. His work mates no longer wanted to know him, and he found himself volunteering at Uptown Bill’s, a sort of refuge for the dispossessed. 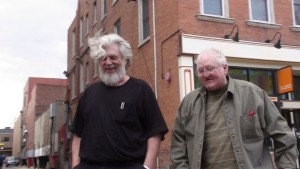 It was here he met David Young, another traveller on disability RD. David had been misdiagnosed as schizophrenic and spent twenty years in an institution after his foster parents wanted rid of him. Uptown Bill’s is a coffee shop as well as a day centre giving people internet access and courses in making chairs. It also has an AA meeting once a week. It is named after Wild Bill, who was the subject of a TV drama written by Barry Morrow, who later went on to collect an Oscar for the ‘Rain Man’ screenplay. Mickey Rooney played the part of Bill.

David had never left Iowa and Dale in one of his more expansive moods hatched a plan to take him to California to see the ocean. The documentary ‘David’s Dream’ was born. All it needed to complete the madness was a cameraman from UK to hop on a plane himself quite ‘high’ and film the trip.

Dale had mentioned the idea to Barry a patron of uptown bills and Barry liked the idea of the documentary. So I thought this is my big break, and agreed to fly across the ocean 8000 miles to make my mark on Hollywood. Well, we got there in the end and had a grand old time, but all the footage sat on a hard drive for three years after I crashed to earth and went to bed.

But now I am back with the enthusiasm and energy to edit it and have a screen date of October 10th at World Mental Health Day in Manchester England and maybe just maybe it will win the Sundance prize and I can take my rightful place next to Jim Carrey at the Oscars.

Below is a video about the film:

4 Responses to Guest Post: "David’s Dream" – How a Documentary About Bipolar Disorder Made a Dream Come True