You are probably thinking I meant to say, the Tortoise and the Hare. True this is a very useful tale, however I was not mistaken… I meant to say Hippo.

I have a great love of mythology. African myth is particularly intriguing, as there’s never been a single, unified religion in that region, resulting in a vast array of mythology. One of my favourites is that of the Hippo and the Hare. To tell this story properly, requires space, but I shall summarise thus:

Long ago, Hippo walked through the jungle a proud and beautiful creature. Hippo was kind, if a little shy, but as time passed, Hippo became very prideful, and would stare at his own reflection for hours. When other animals passed, he would call out “Look at my coat! Is it not the finest you’ve ever seen?” “Oh yes,” they’d reply, for truly it was magnificent. 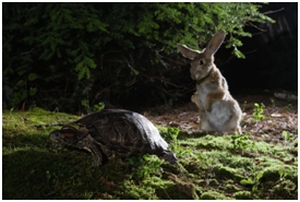 Eventually, the other animals grew tired of Hippo’s pride, then one day, Hippo caught sight of Hare. “You poor creature,” Hippo said. “How awful to live with ugly ears, such a silly tail, and those horrible legs; your life must be terrible.”

Hare was furious, and hurt by Hippo’s insults. To punish him, Hare built a tall circle of grass around Hippo’s house, and told Hippo, “There’s bad weather coming, it will protect your beautiful coat.” Hippo thanked him and went to sleep.

Hare set the grass alight. Hippo woke in fright, to find the fire had caught his beautiful coat. He ran through the forest to the pool and dove under the water. When he finally surfaced, it was only to suckle in more air, before he plunged back down again. Hippo grew to like it underwater – it was calm, cool, and soothing in the dark.

When he finally came out he was thirsty and turned back for a drink, only to see his reflection and cry out in horror, for his beautiful coat was ruined.

Ashamed, Hippo went back into the pool and sank into the depths. From then on, he only rose to the surface for a quick look around and another breath, before plunging out of sight once more. Hippo was embarrassed about the way he’d mocked Hare, and didn’t want to face him. 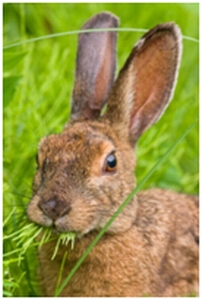 There are two reasons I’m fond of this myth: firstly, it’s a lovely cautionary tale about pride coming before a whacking great fall; secondly, I regularly refer to myself as a Hippo, due to the extreme amount of weight I’ve gained as a result of my bipolar. For a person accustomed to being very slim and fit, suddenly finding I weighed close to twenty stone was…an adjustment. I was embarrassed to go out, had no self confidence and – worst of all – knew that I deserved it, for when I was skinny I despised people who were overweight: I thought of them as Hippo thought of Hare.

For a while, I got stuck in my own metaphorical pool too ashamed to come out. Now I’ve accepted the fact I’ve gained weight, realised it isn’t the end of the world, and am doing the best I can to lose it. It’s a process, a slow process, and I’m up and down with it as I am with most things, but the important thing is that I stopped being Hippo and started being more like Hare – I saw something I didn’t like, and rather than wallowing in it, I did something about it.

Please, don’t reach for the matches – I’m not being literal! This is merely an example of how I went from walling in my condition, to actively doing something to help myself.

In my experience people react in one of two ways to being bipolar: they deal with it as best they can, when they can, or they wallow in it. When I say ‘as best they can’, I mean just that. Being caught in the awful depths of depression, unable to pull yourself out does not mean you aren’t still doing the best you can.

When these moods do end, the depression lifts, the mania plummets, those who do the best they can strive to understand what caused the mood change to begin with. They struggle to adjust their lives in ways that will (hopefully) ensure such moods don’t happen again, or at least don’t happen so often or to such extremes.

These people learn about their condition, see their psychiatrists and CPN, discuss medication options, take prescribed meds as and when they should. Perhaps they try group therapy, CBT, counselling or mindfulness classes. They follow the ‘positive steps’ and attempt to educate their friends and family, so they better understand what to expect and how to help.

They do everything possible to minimise the damaging affect bipolar has on a person’s life.

These people are – like Hare – proactive whenever they are physically and mentally capable of being.

They do the very best they can. 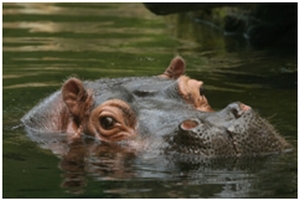 The other type of people, are wallowers (again, I’m not being literal). They’ve soared through the dizzy heights of mania, crashed into the depths of depression, and when they finally managed to drag themselves back out of the water, they turned their stubby tail and went straight back in.

There is a difference between the crippling depression a person feels as a result of their own brain chemistry, and the conscious decision to simply remain in the water. It’s familiar there, easier. They could climb out, but they don’t. They’d have to apologise to Hare, risk being laughed at; they’d have to deal with the same everyday crap that other people endure on a regular basis.

There is almost a freedom in being bipolar that is dangerously seductive: you have a very good reason at time for being unable to do certain things. Not an excuse, a reason. But it is frightfully tempting, when you’ve somehow emerged from the other side, to turn back. It’s terrifying to think of putting yourself out there, only to find you relapse and are thrown back in. It seems safer to stay where you are, than it does to try and fail.

There aren’t a great many things we can do to change the nature of our condition. What we can do is learn to deal with it, and there is no right or wrong way to deal with being bipolar, because it is such an individualistic condition. 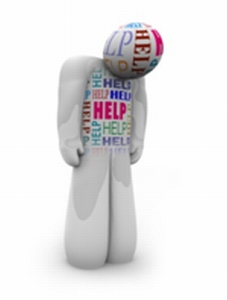 Wallowing however, is a conscious choice to NOT deal with being bipolar. It is a way of saying ‘I’m bipolar: I need never be anything other than bipolar’.

There may be some people for whom this is genuinely the case – it may well be that for some individuals, their condition is so bad they are literally incapable of doing anything other than simply surviving. I have yet to meet a single person for whom that is true, and I am grateful this is so. 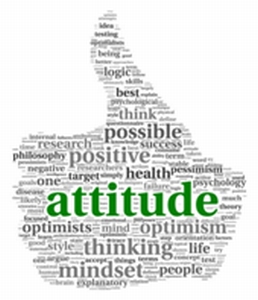 There’s nothing wrong with having a bit of a rest, a period where you know you can climb out of the pool, but you’re so tired you wait a while, recuperate, so that when you do climb out, you climb out strong. This isn’t wallowing, this is adjusting; this is common sense.

Spending every day for the rest of your life too afraid to try, because of what people might think, is wallowing. Staying in the pool forever because it’s comfy and you’re too lazy to do anything else, is wallowing. Watching the world pass you by, because you made some mistakes and you don’t want to face them, is wallowing. Using bipolar as an excuse for never doing anything with your life, when you are capable of doing things, is wallowing.

If you are wallowing, stop, and do something that will help you get better instead. Half the battle with bipolar is attitude. You don’t have to be a raging optimist – I’m a terrible pessimist – you just have to be willing to seek help, and help yourself. Be proactive. Everyone gets to wallow a little from time to time. Just make sure it’s only a little, and it’s only from time to time.

3 Responses to Hazel Butler: The Hippo and the Hare