In this guest post from Mental Canyons, she describes some of her experiences and lessons that come from living with bipolar disorder at the workplace.

The past several days have been tough. I lost my job last January – I was fired. I know I contributed to the dismissal.

When it came to caring for me, I made poor choices. Lunch time would find me shoveling food into my mouth while feverishly working at my computer. Short breaks throughout the day were non-existent. One of my colleagues implored me to join her in the break room, but I repeatedly declined. “You need a break. You need structured breaks to replenish your well.” I was working 50 to 60 hours per week. Why was I so driven? The workload was intense, and I thought I had no choice. I had to work hard to support my family. I began to think management was watching me in particular. Now I think everyone was “under the microscope.” 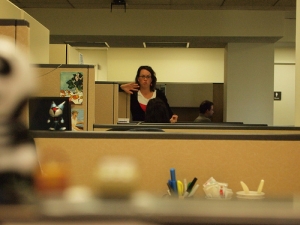 A contributing factor to my dismissal may have been the complaint I filed against my supervisor for verbally abusing me on the telephone. She was exhibiting at a conference 3,000 miles away, and one of the regular vendors I had hired failed to arrive on site at the pre-designated time. I was accused of not doing my job, not knowing how to do my job. She was relentless and oppressive. By the time the call ended, I was fighting back tears. In the privacy of a colleague’s office, I broke down, sobbing and rocking. The more I tried to recall the conversation for the complaint report, the more incoherent I became. The next thing I knew, I was in an ambulance. I remember providing a urine specimen and lying wrapped in a blanket on a bed in the psychiatric emergency room, but not much else. Convinced by my older daughter’s promise to monitor me, the E.R. psychiatrist reluctantly discharged me. I was grateful to have narrowly escaped another hospitalization. I returned to work a week later. In an effort to protect me, the company’s H.R. department chose to tell my supervisor that I had had a problem with my diabetes, a more acceptable illness. (In addition to bipolar disorder, I have diabetes and am on daily medication for it.)

While the company’s management style was difficult, the physical environment also proved detrimental to my well-being. My cubicle was one of many on the floor of a factory. People had a tendency to yell to one another rather than communicate by phone. Between customer service conversations, phones ringing and the persistent overhead paging system, the noise level was often unbearable. I found that I would have to insert ear plugs or headphones to reduce the assault on my brain. On multiple occasions I implored my supervisor to allow me to move to the quieter building, but my request fell on deaf ears. As a result I started having anxiety attacks. Fight or flight! I felt as if an elephant was sitting on my chest. I started taking clonazepam just to get through the days. I became irritable and impulsive. I recall standing up in my cubicle and addressing my coworkers: “I can’t stand stupid people! There is no excuse for stupidity unless first cousins marry! No, that’s not what I mean. It’s ok to ask questions, to ask for help. What I mean is that I can’t stand lazy people. Why can’t people do what they’re supposed to do, what they’re hired to do?” Yes, I really said those things. And with gusto. No doubt my outburst did not help my tenuous situation, both mentally and financially.

Ok, so when I land another job, which I will…. It’s only a matter of time, right? Rather than eating at my desk and working through my lunch break, I shall eat my lunch in the cafeteria or go out. I shall take breaks throughout the day to recharge my battery. I know there are other things I can and will do to help myself. The point is that I’m learning, right? I certainly hope so! That I won’t make the same mistakes? I certainly hope not!

5 Responses to Guest Post: On The Job or How Not To Take Care of Me