Going the F**k To Sleep: Insomnia and Bipolar Disorder

There’s a wonderful children’s book used by parents who want to traumatize their children and to teach them to talk like truck drivers. It is called Go the F**k to Sleep by Adam’s Mansbach, and it’s about a parent’s frustrating experience trying to get his child to sleep. After dozens of expletive-laced poems about sleeping kittens, the father finally gives up on trying to put his child to bed, falls asleep, and finds that the child has gone to sleep without him. Of course, it’s not really meant to be read to children (er, I hope not), but is intended to express the mixture of tenderness and frustration involved in putting a toddler to sleep. It was, of course, a #1 best seller.

However, on reading it, I couldn’t help but think, “Hmm… this frustration is kind of familiar, and not just from putting my children to bed.” After a while, I realized, “Oh yeah, this is what it’s like trying to put myself to sleep!” I lie there in the night, playing endless tricks on myself, trying to get myself to go either to sleep or even to bed. Meanwhile, I fight against myself like a toddler: well, why not just get up for a minute and walk around? Why don’t you go get a drink? Then, of course, I get frustrated with myself and tell myself to “Go the F**k to sleep” until, if I’m lucky, I’ll fall asleep exhausted from the effort.

Why Sleep Is Important

The sense of invulnerability and infinite energy that comes with hypomania is basically an illusion; we’re really exhausting ourselves. 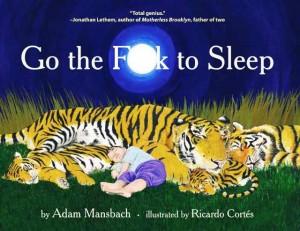 – Fair Use Rationale: to illustrate the person(s), product, event, or subject in question.

Like most people with bipolar disorder, I’ve heard repeatedly that sleep is an important part of managing bipolar symptoms. This is demonstrably true. People who sleep better have less frequent and less severe episodes, and are better able to handle the episodes themselves. I’ve certainly noticed this in myself. Whenever I look back on one of my episodes, I find that it is preceded by serious problems sleeping. Clearly, proper sleep can really help in managing symptoms.

Hypomania and mania create the illusion that we have endless energy and power. However, even if we don’t feel tired, insomnia exhausts both our bodies and our brains. Hypomanic bodies and brains don’t actually have superpowers. Instead, it’s like we’re running an engine twice as hot with half the downtime. This causes real strain on our entire system, and makes us weaker when it comes to fighting off episodes or just righting ourselves during one. The sense of invulnerability and infinite energy that comes with hypomania is basically an illusion; we’re really exhausting ourselves.

So, sleep is important for people with bipolar disorder. That’s why it’s in all the pamphlets.

Why Knowing that Sleep Is Important Is Completely Unhelpful

When my brain isn’t co-operative, I lie there like an idiot in the dark, patiently breathing slowly for hours…

The problem, however, is that we don’t have full control over sleep. I can lie down, close my eyes, breathe deeply and slowly, which facilitates and, to some extent, imitates sleep, but I can’t actually choose to fall asleep. So, when my brain is co-operative, I will fall asleep. And when my brain isn’t co-operative, I lie there like an idiot in the dark, patiently breathing slowly for hours, asking my brain to “Go the f**k to sleep.” After a few nights of this, it becomes a dreary and boring routine: lie down, breathe, keep lying down, keep breathing, keep lying down, keep breathing…. Of course, this makes me dread going to bed in the first place. 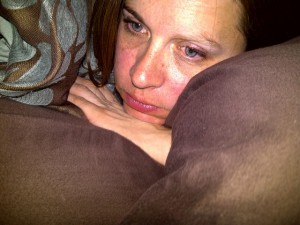 To be honest, after a few nights of this, I basically give up. Yes, I know the pamphlets tell me not to do this, but after a few nights of sleeplessness, I simply won’t go to bed unless I’m tired. After all, what’s the point? I can either lie in bed in the dark, patiently thinking (which, of course, will be me ruminating over my day – not exactly the ideal hobby for a bipolar person), or I can get up, read a book, watch some TV, or try to get the stupid thumbnails working on my website for three hours (which I did!).

Now, the guilt sets in. I’m going to have to explain to my psychiatrist why I’ve only been sleeping four hours per night. Moreover, when I find my concentration flagging after weeks of this, I’ll be able to remind myself that it was all my own fault. After all, I didn’t go to bed, when I really should have. Surely, if I’d just laid there, breathing and telling myself to “go the f**k to sleep,” I wouldn’t be having this problem! Even though I know this isn’t true, insomnia is precisely the kind of thing that at least feels like a moral failing. If sleeping wasn’t so easy, why would the pamphlets just be stating it like simple advice?

A Few Tricks I Have Learned

Television shows, conveniently compressed to 43 minutes on Netflix, are fantastic for turning off my brain.

After decades of insomnia, I have learned a few simplistic tricks that I thought I’d share with my fellow sufferers. None of these work perfectly, but they’ve given me at least some control of it over the years.

Waking Up at the Same Time Every Day

Of course, having kids helps with this now, but it’s easier to set a time to get up than a time to get to bed. I learned this trick about a decade ago, and it has served me well. I punish my silly little brain, and say, “I’m getting up at 8 a.m. tomorrow, no matter what, so if you don’t get to sleep, you’re going to be exhausted tomorrow.” My brain of course, doesn’t believe me, but after a couple nights of this, my brain will sometimes get into the right rhythm. Since it’s sleep rhythms that are important, and I have more control at the waking end, a constant waking time can help.

Note that this doesn’t always work. If after four days I’m still tired, it won’t work. My brain will have just settled into four-hours-per-night mode, and it’s time to pull out bigger guns. 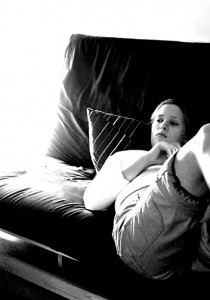 It has been scientifically proven that excessive television watching turns people into undead zombies that will wander a post-apocalyptic wasteland [citation needed]. Television shows, conveniently compressed to 43 minutes on Netflix, are fantastic for turning off my brain. This only really works when hypomanic, but it actually can work. If I pick a show that is a) mindless and b) does not include cliff hangers, then I can often dull my brain to the point that it is more willing to shut itself off. Sometimes, I’ll even be lucky enough to fall asleep on the couch.

Of course, and I can’t stress this enough, don’t watch intense shows with cliffhanger endings. If I watch a show like 24, The Wire or Battlestar Galactica when I’m insomniac, I’ll be up for three days. Instead, there are some wonderful documentaries that I’ve never finished. David Attenborough has put together dozens of hours of boring documentaries about boring animals doing boring things, and put them all on Netflix for free. Thank you, David!

Then, of course, there’s medication. Any medication should be taken if and as prescribed a psychiatrist, but I’ve personally found sleeping pills to be very helpful. I don’t use them every night, but if I’ve been having trouble sleeping for a week or so, I’ll take one of these. Once upon a time, I thought, “Tsk tsk, I don’t want to take sleeping pills. Then, I’ll be dependent on medication.” However, I gave up the “I don’t want to be dependent on medication” fight a long time ago, and I’m happier for it.

In fact, I’ve found taking the occasional, properly prescribed sleeping pill to be life changing. It can help me kickstart my schedule by giving me the opportunity to give my body and my brain a night off. Even if I don’t have one, it’s actually quite comforting to know that I have the option if I need it.

Going the F**k to Sleep

Insomnia has been a constant companion to me since I was a child, and bipolar disorder only made it worse. I feel like I’ve been trying to put a toddler to sleep every night for twenty-five years, and it’s something I really haven’t gotten a complete handle on. It’s something that can be really disruptive and, if I’m not careful, can completely exhaust me for months on end. However, I have developed a couple of simplistic tricks that I’ve found helpful, and medication has been very helpful as well. I finally feel like insomnia doesn’t rule every night, and it’s a good feeling.

What I Cannot Change, What I Can Change, and How To Know the Difference

5 Responses to Going the F**k To Sleep: Insomnia and Bipolar Disorder