Lorelei Beckstrom hails originally from Minnesota. After studying painting, sculpture, and graphic design for seven years, Beckstrom relocated to the mountains of Colorado in 1994, thus fulfilling a childhood dream to move to the west. She took a long hiatus from fine art to build an off-the-grid dream home, and while she lived in a tipi adjacent to the structure-in-progress, found herself stretching canvases on tipi poles and resuming her artistic passion.

After a diagnosis of Bipolar II in 2004, her painting became her primary form of therapy. Leaving her high-stress publishing business and closing her yoga studio, she finally had time to focus on her health and on her painting.

Beckstrom originally became known for her acrylic, wire, and etched plexiglass paintings and installations of brains, neurons, and machines, but after 20 years, returned to oils and a more academic narrative figurative approach. It was then that she began to immerse herself in a world of wire walkers and audiences, painting with what she eventually realized was an ironic passion—the artist actually harbors a fear of both heights and crowds. Beckstrom theorizes that she’s responding to her “fears in some odd way, and painting to work through them.” Beckstrom says she realized that she had “been an artist for all those years, but not a painter.” She now very much considers herself to be a painter. Beckstrom often feels like she’s leading the painting, up until a point, and then it leads her. “The world created in the painting becomes richer than real life- more real, almost.”

Beckstrom has shown prolifically in Colorado, where she co-owned the award-winning Rubbish Gallery, and her work resides in collections in the United States, Mexico, and England. She is represented by The Modbo in Colorado Springs and the Carla Wright Gallery in Denver. Her most recent work can be viewed at www.loreleibeckstrom.com. 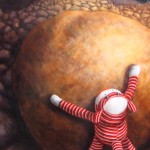 “Sisyphus and the Conflict of Hope”, Copyright © Lorelei Beckstrom 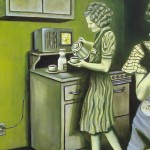 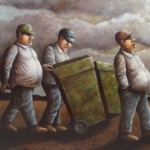 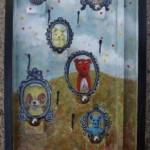 “The Stories They Tell a Varied Cast of Characters”, Copyright © Lorelei Beckstrom 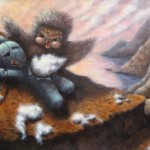