Last week, Amber Portwood, one of the four single mothers on the MTV television show Teen Mom revealed that she had been diagnosed with bipolar disorder and that she tried to commit suicide after the season ended.

This isn’t the first time that a mentally ill person either was temporarily institutionalized or tried to commit suicide after an appearance on reality TV. Susan Boyle, who came second place in the second season of Britain’s Got Talent temporarily entered a psychiatric institution the day after the final of that show, and Paula Goodspeed committed suicide outside of Paula Abdul’s home after a rejection on Americal Idol. 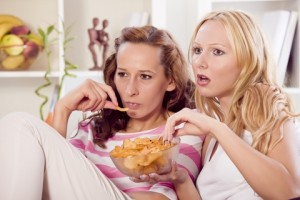 First, producers need to understand that sudden publicity is a work-related hazard for the mentally ill, and need to ensure that the mentally ill do not suffer what are workplace injuries as the result of their appearances.

Second, if someone has a psychiatric episode on a television show, it shouldn’t be aired. The problem isn’t simply that producers are sitting back and watching; they are actively choosing psychiatric episodes to display for the entertainment of their audience. In effect, this turns reality TV into freak shows where the mentally ill are the bearded ladies.

I hope that I am not contributing to the problem by giving these examples, but I want to make it clear just how blatantly television shows have exploited the mentally ill for the sake of entertaining viewers.

One of the most egregious examples was on an early episode of American Idol, in which a contestant named Mary Roach claimed that she had voices in her head speaking to her:

To give you a sense of what people found amusing about this video, its title on Youtube is now “Most psycho American Idol contestant ever, Mary Roach !!!” and has garnered over 2.8 million views. The video itself at one point includes the famous music from the shower scene in Psycho, and it ends with the voiceover saying “With the voices in her head saying, ‘Way to go, you really blew it,’ Mary made a dramatic exit.”

There are dozens of cases like this one from various reality shows. Someone who clearly is mentally ill is shown and ultimately, the psychiatric episode itself is what is intended to be entertaining. It treats the mentally ill person as someone that is amusing.

The appropriate paradigm from which to think about mentally ill performers on television shows is that of workplace safety. It doesn’t matter if the person is on salary or not; by using the person as a performer, producers have an obligation to ensure that they create a safe environment. No one could argue that producers on a talent show don’t need to make sure the lights don’t fall down on the contestants, just because they are not paid.

For many people who are mentally ill, stress itself can be a trigger for their episodes. Suddenly pushing someone into the limelight is therefore a danger for the mentally ill, especially if they are to be so pushed as an object of ridicule.

True, producers won’t always be aware that someone has a mental health illness, but in a number of these cases, there are some fairly clear signs. In the case of Mary Roach, that she was mentally ill was evident.

On the other hand, Paula Goodspeed had mental health problems, though they were not quite as evident. However in 2008, almost three years later, she killed herself outside of Paula Abdul’s home:

The post-audition interview is a little worrisome, but it is not immediately obvious from this video that Paula Goodspeed was mentally ill. However, it is well-known that sudden publicity can trigger episodes in the mentally ill.

So, before putting an audition on the air, the producers should ensure that they will not cause serious injury to the mentally ill. This could include simply having a psychiatrist observing auditions and post-audition interviews for red flags, and then not airing the bad auditions of mentally ill contestants, as that causes a risk of harm.

Note that I am not saying here that the mentally ill should not be allowed to compete or appear, as that would be discriminatory. I am saying that, if someone has already been rejected from the competition, there is no reason to show the audition of a mentally ill person who has already been eliminated over the thousands of other options.

However, when a competitor does well or when someone is hired for a long-term appearance on a television show, then the producers have a duty of care to those people, as the potential damage done from the fame is directly a work-related hazard.

Simon Cowell, the man who made fun of Paula Goodspeed’s braces above, handled the case of Susan Boyle fairly well. She had a (still) undisclosed psychiatric condition that led to a hospitalization the day after the final of the second season of Britain’s Got Talent. In the following very interesting interview, he acknowledges that he “didn’t realize how much pressure she was under,” and that he has a long-term “duty of care” for her.

Here Simon Cowell gets it right. When dealing with a contestant with whom he will have a long-term relationship, he acknowledges his duty of care for that contestant.

On some reality shows, however, the producers sit back and watch while serious mental health issues persist. On the show Teen Mom, Amber Portwood spent time screaming at other people, overreacting terribly, and ultimately allegedly hitting her partner.

So, what did the producers do? Well, they aired it, and the police ultimately intervened after the episode was aired. Despite what was going on, it wasn’t until after the incident was reported on the Today Show that there was any legal intervention.

Earlier this year, Amber Portwood attempted suicide, and has been having a great deal of trouble adjusting to her celebrity status: “I’m sick and tired of people bashing me every time I leave my house. When I go out, I mind my own business, but people try to fight me and get me going because I guess they think I’m most famous for fighting Gary…”

The clip that ultimately got her arrested is below (warning: there is some coarse language and violence):

The problem is that celebrity is not seen as a workplace hazard for mentally ill people (except in the case of Simon Cowell for the winners of his competitions). However, people who are mentally ill in celebrity positions are exposed to a special kind of workplace hazard, and their employers need to ensure that they are not harmed.

Producers bear responsibility to those on reality TV, because celebrity itself is a workplace hazard for the mentally ill. In the case of single auditions, failed auditions by the mentally ill simply shouldn’t be shown. Their entertainment value is voyeuristic and they risk causing serious harm. In the case of longer-term people on reality TV shows, employers have a duty of care stemming from an employer’s obligation to ensure the safety of his or her workers from workplace hazards.